The Center for Student Success is the home base for Beacon learning specialists. By Gabrielle Russon Whenever a freshman walks into learning specialist Melissa Mayor’s office, she shares a piece of herself, like how she is a sports fan or grew up in a military family — anything to build trust. “The connection starts the […]

President George Hagerty and Dr. Oksana Hagerty attend the third Learning Difficulties Conference in Sharjah. By Richard Burnett More than five years since its work in the United Arab Emirates began, Beacon College has opened a new chapter in its partnership with that country’s leading advocacy group for students with learning differences, President Dr. George […] By Richard Burnett A decade ago, Remy Partlow’s family in Alaska was in crisis. Abandoned by the father, their mother suffered from bipolar depression and Remy wrestled with autism. Later, trapped in an abusive relationship, Remy fled 4,000 miles to Central Florida, escaping a violent, drug-addicted boyfriend. Today, the pain of those days has gradually […] Daniel Maya was supposed to be in Hawaii, running his first marathon with a landscape of beautiful beaches behind him. But this was 2020. The pandemic trashed plans for anyone who had vacations or big goals.  Instead of running in Hawaii, Maya’s race became a virtual one.  The then-Beacon College student ran 26.2 miles in his neighborhood back in his hometown of Westport, Connecticut. He completed the same four-mile loop over and over while his parents cheered him on and passed out Gatorade. 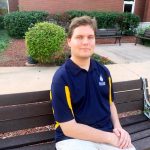 As a scuba diving and scuba ecology instructor, Alex Rhodes has developed a fondness for the beauty land dwellers often don’t see. So, when the senior anthrozoology major decided to take a shot presenting at the prestigious Anthrozoology as International Practice student conference at the University of Exeter in the United Kingdom the choice of topic was clear. And when he learned that his presentation, “The Effects of Tourism on Coral Reefs,” was selected as the only undergraduate presentation out of 10 U.S. lecturers, Rhodes was thrilled.

Beacon College students are studying the manatee crisis as Florida’s beloved sea cows are dying out in record numbers. It’s part of a troubling pattern. Last year, more than 1,100 manatees died from starvation, the cold and boat collisions in Florida.

Travel renewed, Beacon Students Travel to a Land Down Under As hundreds of travelers before them, a flock of Beacon College students set out on a journey this summer in search of knowledge and fun in another part of the world. Their destination: Australia. Nearly 30 students, one alum, two parents, and one sibling joined the June trip, part of the college’s Travel Abroad Program led by Provost Shelly Chandler This year, the Tuscany adventure, believed to be the only semester-long study abroad program for neurodivergent students, is back on the manifest. Nearly two dozen students have been selected for the September to December semester at the University of Florence’s campus in Prato, a town about 40 miles from Florence. She set out at dawn on her highway marathon, a 2,400-mile journey to a new life. With her three-year-old daughter as copilot, Sarina Alford covered the continent-long trail in three days — a feat that most travelers would never tackle. Her destination: Beacon College, Florida. From suburban San Diego to Leesburg, Alford was driven by the hope of a college education and a career in her future. It was something that had seemed all but impossible earlier in her life as she wrestled with dyslexia and other learning issues. Last year, however, her mother found Beacon online and shared what she found with Alford.