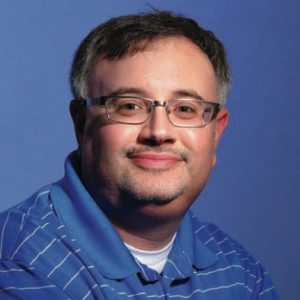 Phillip Gottdenker is a happy guy. The 2003 Beacon College graduate has a job he loves, a wife he loves, and a lifestyle that suits his relaxed approach to life.

“My main job is social media, to advertise our company,” Gottdenker says.

The company is Down Home Property Management in Oxford, Fla. Owned by his wife, Stacey, and her mother, Down Home specializes in the management of vacation and long-term rental homes in The Villages retirement community.

As the company’s manager of social media, “I do the ‘house of the week’ on Facebook, and I promote our company on all the social media websites,” Gottdenker says.

The New Jersey native was diagnosed with a reading disability at an early age and attended a private school for his elementary and middle school years. His high school was a boarding school designed for students with learning disabilities. Gottdenker knew that he wanted to attend college and that he wanted a computer-related job. He learned about Beacon while at boarding school.

“I loved going to Beacon,” he says. “It taugh me how to communicate, how to be more patient, and how to thrive in life. There was always someone there if you had questions about anything.”

While at Beacon, Gottdenker took many introductory computer classes and graduated with a bachelor’s degree in liberal arts and minors in computers and business. The next step in his educational journey took him to a private university where he received a degree in network communications in 2007.

After eight years and two degrees, Gottdenker decided to open his own business repairing computers and teaching others how to use computers. “There was this group I found online high-functioning teenagers and adults who had learning disabilities, autism, or Asperger’s,” he says. “I taught them every Monday” for three or four years.

One of the biggest rewards of attending Beacon was the friendships he developed. “For the first two years I was shy,” Gottdenker recalls, “but after that I was definitely making friends and still talk to two or three of them almost every day of the week, even though most don’t live in Florida anymore.”

When he and Stacey decided to get married, he says, a former Beacon professor was among the wedding guests. “He was like my second father,” Gottdenker recalls.

His mother-in-law suggested that Gottdenker work for Down Home Property Management. He readily agreed because “it’s fun for me,” he says. “I love social media.”

“It’s like a puzzle. You’re trying to get more people to look at your Facebook page, Twitter or LinkedIn [accounts] and to get people to come to your business.” His efforts seem to be working.

“We have over 250 homes that we rent out in The Villages,” he says, “and we were sold out last winter.”