Dr. Javier Mouriz, a licensed psychologist, touched on several topics including his 26-year career as a psychologist for The Bureau of Prisons.

His career began at the infamous United States Penitentiary Leavenworth, a medium security facility in Leavenworth, KS with an adjacent minimum security satellite camp.  He later transferred to USP Coleman I, a high-security federal corrections facility in Sumter County, Fla. for the balance of his career.

Mouriz revealed why he chose the psychology field and the steps involved in obtaining a doctorate. He also shared stories about interacting with inmates in a maximum-security prison.

Mouriz, who is from Cuba, also spoke about the practicum experience — which turned into a job — he did while a doctorate student working with Cuban detainees, whom Fidel Castro had released from Cuban prisons.

Today, he is in private practice. It’s good sportsmanship to not pick up lost golf balls while they are still rolling.
— Mark Twain

With visions of Carnoustie in their heads, Summer for Success students gave Tiger Woods a run for his money when they took to the (mini) links at Tree Tops Mini-golf & Softball.

Students teed off, putted, and sliced their way to fun and some incredible holes-in-one. 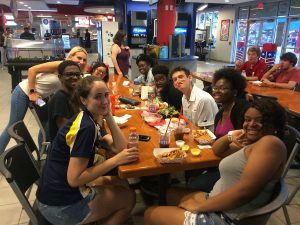 Summer for Success students and staffers enjoyed an exciting night out at a regional amusement park, Fun Spot Orlando.

Some students even braved the new ride — “Head Crush 360.”

Fortunately, no actual heads were crushed in the adventuring, but students gave the ride thumbs up. Fun Spot offered a nice break from the day of college classes.

Between the go-carts, rollercoasters, and corkscrewy slides, the Beacon contingent agreed the venue lived up to its name.

Where the Wild Things Are

On Saturday, Summer for Success students donned their pith helmets (or Adidas caps) and ventured out on safari to Disney’s Animal Kingdom.

It was a compelling mix of revelry and scholastic reinforcement, as the trip built on the animal conservation and humane-inspired approach themes students learned in anthrozoology classes.

C’mon in … the Water’s Fine Nothing satisfies on sultry Florida summer day like a dip in the pool.

For Summer for Success students, Typhoon Lagoon was the perfect summer tonic.

With its wave pool, beach, rides and lazy river, students of all stripes found some way to catch the wave of fun.

Many students, after a stint in the wave pool, chilled out relaxing on the lazy river.

There were no Baywatch sightings.