It was just four weeks ago that we embarked on our adventure and fled Irma which was bearing down on Florida. We continue to explore all that our surroundings have to offer. It is hard to believe that October is here already. In many parts of the United States, now is when the foliage begins to change to a rich palette of autumn colors. Not so here—at least not yet. The hills around Prato are still very green and the temperatures remain summer-like. Beacon in Tuscany – Florence from
the top of the world

On September 29, we boarded the train for the short ride to Pistoia, located just a few miles north and west of Prato. This is another medieval walled city but much smaller, by about half, than Prato. It has its own full complement of historical facts and locations, however. The city is known for its agriculture and horticulture and for its ancient ironworks—here artisans crafted daggers and other hand combat weapons. Local lore has it that the first small hand firearms were invented and produced in Pistoia—hence the word ‘pistol’. There are thermal springs here where for centuries people have come to bathe in the healing waters. This is also the home of the famous fairy tale, Pinocchio. The original story, like many of the other classics, is quite dark and was meant as a cautionary tale to frighten listeners into behaving properly. Finally, Pistoia was named the 2017 Cultural Capital of Italy—a very prestigious and coveted recognition.

There are some stunning examples of Renaissance architecture here and many of the historical structures have made use of the beautiful and distinctive green marble from the quarries (no longer mined) in Prato and their characteristic geometric patterns. We visited the Hospital where through the ages, the sick were cared for. The building has a magnificent glazed terracotta frieze depicting the seven works of mercy: feeding the hungry, giving drink to the thirsty, sheltering the homeless, attending the sick, visiting the imprisoned, burying the dead and giving alms to the poor. The Duomo in Pistoia houses some incredible works of art, notably the elaborate pulpit by Giovanni Pisano. Many students resolved to return to Pistoia for a closer look.

On October 2, we journeyed by city bus to Poggio a Caiano to visit a Medici villa. The villa is in a constant state of restoration as the funding ebbs and flows. It houses original tapestries, sculptures, furniture, paintings and frescoes that serve as a window to country life hundreds of years ago. We were allowed only one hour inside the villa so we moved fairly quickly through the magnificent rooms and spent the rest of our time roaming the grounds where a profusion of citrus trees grown in enormous planters mark the winding pathways. One of the most interesting features of the villa was the enormous painting of the Medici family tree showing the generational complexity of this powerful family.

On October 6 we headed out fairly early and caught a train to Florence where we began the long climb to San Mineato al Monte with a stop at the Piazzale Michelangelo. This is a steep and arduous journey and it took quite a while to get us all to the very top but the reward of the view of Florence from the top of the world makes the effort well worth it. The students forgot their burning muscles and lungs as soon as they turned around to take in the sight.

St. Mineas, for whom the Basilica is named was Florence’s first Christian martyr. After making a pilgrimage to Rome from Greece, Mineas arrived in Florence in about 250 and became a hermit. He was persecuted and beheaded and according to legend, he picked up his head, replaced it on his shoulders and went to die in a cave where he had lived as a hermit. The church now occupies the spot where that cave was located. The current structure was built in 1018 and the work of many Italian masters (Gaddi, Aretino, Manetti, della Robio, and Rossellino) grace the interior. The monumental cemetery outside of the church holds the remains of many celebrities such as Carlo Collodi, the creator of Pinocchio. The cemetery’s fortified enclosure was created by Michelangelo in 1529.

Of course there is academic activity going on as well. The student blogs are full of their impressions and perspectives, they are drawing and getting ready to paint, and they are taking hundreds of photos. They are about to watch the movie version of A Room With A View to reinforce their reading and analysis. They also continue to record their sensory observations to be used in their capstone presentation that will be a permanent reminder of their Tuscan experience. They will be able to revisit the sights, sounds, tastes, and smells of this adventure for years after it has ended.

Photos from Prato / Pistoia and Poggio a Caiano 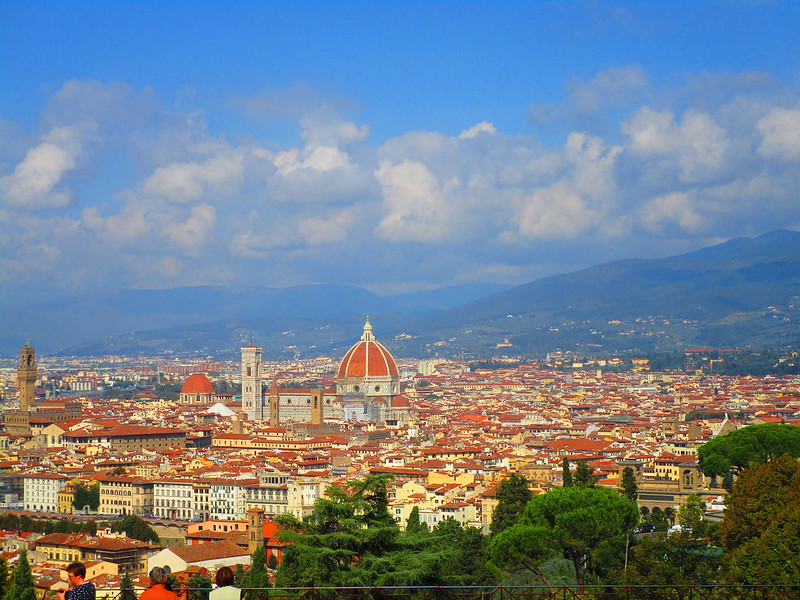